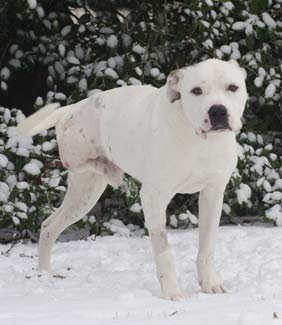 
He's a tripawd (3 legged) with an ear missing
and he has a story to tell.


There are cases when we say to ourselves: 'If this were a human, he or she would not have survived.'  What many of these dogs endure on the streets is baffling, and this fact is rarely more apparent than during days like today - when Mandela was rescued. [warning: link will take you to a graphic video of Mandela's rescue.]


We received a call about a stray in a field who was in obviously terrible shape.  When the rescue team arrived on the scene, they immediately knew how dire the situation truly was.  On a frigid day, an emaciated, severely injured dog was fighting to stand up.  His name is Mandela.

As our founder, Randy Grim, approached, Mandela looked like a zombie.  He was in shock.  He was extremely malnourished and dehydrated.  Randy quickly found the primary concern - a portion of one of Mandela's back legs was completely cold, black and lifeless.  To Randy's shock, on the inside of Mandela's leg, the bone was completely exposed.  He had been "living" this way for a while.

The rescue team rushed hin back to the Stray Rescue trauma center, where the veterinary team got to work stabilizing him.  His temperature was low and his body was desperately trying to fight off infection.  In all likelihood, his dead leg would have fallen off it not for the bone being there.  And yet Mandela, with his resilient spirit, never surrendered.

Obviously, Mandela has lived the kind of life that is hard to imagine.  Even his lip on the right side of his face was split at one point in his life, having healed into a bifurcated one.  He has had a very, very rough life.  We will never knew what happened to Mandela that brought hin to this point in his life...

In the rush to get him to the shelter, and with the severity of his other injuries, it was hard to notice that Mandela only had one ear as well.


After fighting for his life in intensive care and the successful amputation of one of his back legs, Mandela has made a big three-legged step on the road to a happy life.

Stray Rescue of St Louis began as founder, Randy Grim's one man crusade to save stray dogs.  Officially organized in 1998 as a non-profit, Stray Rescue's sole purpose is to rescue stray animals in need of medical attention, restore them to health, and place them in loving adoptive homes.  Virtually all of the pets they save have been abused and neglected.  They've been dumped on highways or remote country roads.  Abandoned in public parks, empty houses and dark alleys.  They currently operate two no-kill animal shelter in St Louis, MO