Jeffie was a Cush Dog 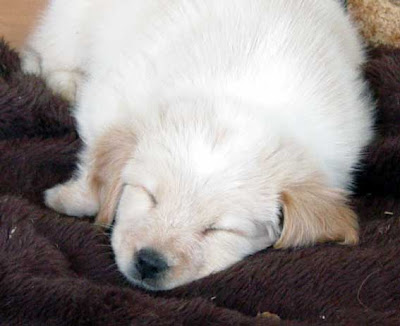 Jeffie was a Cush Dog.  Not familiar with the term?  You can read about it in a guest post from the Dog Daddy here.  Its sort of along the lines of an heir and a spare.

A Cush Dog provides a cushion, a soft landing, when the loss of another dog makes you feel you've hit rock bottom.

I resolved years ago to never be without a Cush Dog.  When my beloved Benji died, Sherman was my Cush Dog.  I was heartbroken and the very best comfort to be had was from Shermie.  In fact, that's when the Dog Daddy's no-dogs-in-the-bed rule was first broken.  As I cried myself to sleep, I hauled Shermie into bed (on only my side, of course) and we grieved together.

In 2006, it dawned on me that I had a problem.  Tucker and Lucy had become senior dogs and they were only 6 months apart in age.   Okay, I also will confess that I had the puppy fever.

I almost always have the puppy fever, but in this case, I had another good reason for beginning the process of adding another dog to our family.  I needed a Cush Dog.

My hunt began.  As I surfed Petfinder and read the newspaper ads, I waited for that feeling.  The one that tells you this is the one.

There came a day when there was a lemon yellow, Lab looking puppy that called to me.  When called, the shelter told us that Joe had 2 siblings with him, his mother was a Golden Retriever, and they'd been picked up as strays.  Joe was the only one listed on Petfinder.

Gary took off work early that day and off we headed to Dogwood Animal Shelter to adopt Joe.

Joe turned out to be a very pushy, dominant personality, pup.  The Dog Daddy was smitten, but I found it hard to imagine Tucker and Lucy being too thrilled.  As we played with all three of these puppies in the shelter's puppy room, it was another of the puppies that began to work his way into my heart.

"Stevie," as they called him, was much more Golden Retriever in appearance, and much more laid back than Joe.  And, every once in awhile, "Stevie" talked to me with little puppy grunts.

I had a feeling that "Stevie" was the one and thank dog I did! 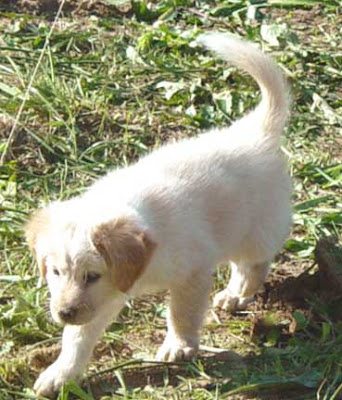 Dog names are important to us and the name "Stevie" was rejected.  After much discussion, this puppy was named Jefferson.

My very favorite memory of Jeffie's puppy-hood is a sort of mental collage of all the early mornings we spent together. 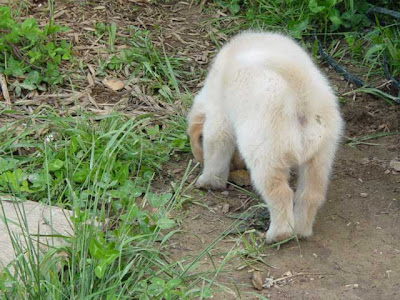 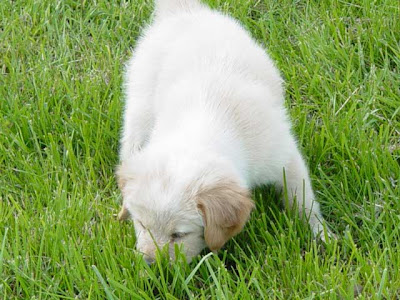 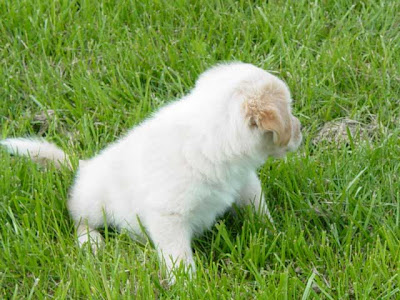 I'm an early riser and Jeffie is a spring puppy.  Sunrise would find us together outside.  Sitting on the back porch steps, we enjoyed birdsong and the smell of flora and grass.  Jeffie might be in my lap or he might venture off to playfully explore the world nearby. 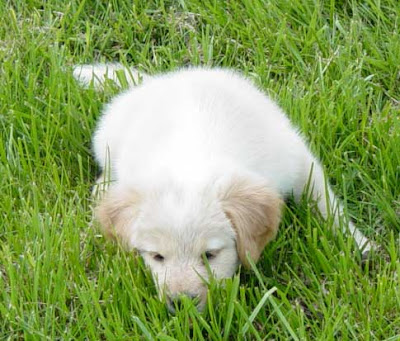 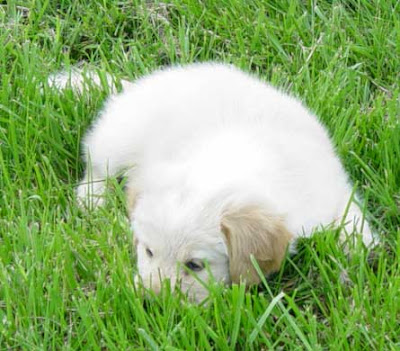 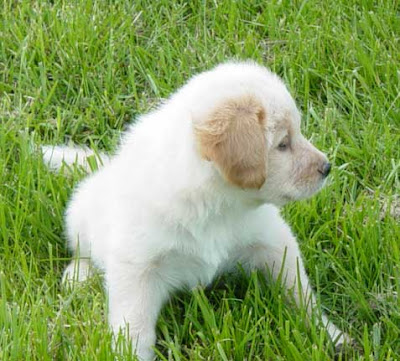 It was a deliciously sweet time of life.
Very fitting for my sweet boy, Jeffie. 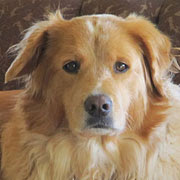 We're celebrating Jeffie's 7th birthday all month long here at Talking Dogs.  Did you get the invitation to his party?   Have you entered to win some Monkey Earrings from For Love of a Dog and a "monkey" (dog toy) for your dog?