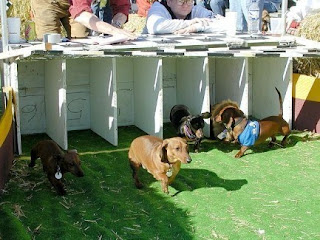 Dachshund lovers and their lovable companions will gather in Soulard Market Park in St Louis today for the 18th annual PetsMart Wiener Dog Derby.  There will be a tournament brackets, medals for the winners, and St Louis radio talent will be calling the race.
Registration begins at 10 am at the park; cost is $10 to register your Dachshund.  The first heat takes place at 2pm.  Dachshund dogs race in three divisions bases on age:  Cocktail Wienies, Ballpark Franks, and Hot dogs.  The finals are followed by the trophy presentation ceremony in the Wiener's Circle.
Free to watch, the Wiener Dog Derby is just one event that's part of the Historic St Louis Missouri Soulard neighborhood annual Mardi Gras.
One of the Dachshund dogs racing today is Gunner, the little brother of Roscoe P Coltrane.  Last year Roscoe crossed the starting line, did a u-turn and went back to the beginning.  Roscoe passed away in January 2012 and owner, Jacki, is hoping Gunner will cross the finish line for Roscoe.
Soulard's Mardi Gras also includes the Pet Parade and it's one of world's largest.  Check out the dogs in costume and have a look at the race:
For more information about the Mardi Gras in Soulard events, visit their website www.mardigrasinc.com
Posted by Talking-Dogs at 4:02 AM