The Possom Dog Gang is wanted in connection to a suspected murder.  An anonymous tip to authorities led to the discovery of a young, black opossom surrounded by members of this very well known dog gang.
When asked if the opossom was dead, Chief Medical Examiner, Mr. Gary replied:  "Your guess is as good as mine."  Unfortunately, during the examination of the opossom, the perps took off and outran authorities.  Mr. Gary then removed the body to an undisclosed location.
The following members of the Possom Dog Gang are now sought for questioning.

Shown above is Jeffie, known aliases include:  Jefferson, Jeffbo
Don't let that sweet looking face fool you.  Just look at those teeth and have a chat with the UPS driver.

Shown above is Tucker.  Known aliases include:  Sugar Lips, Butt Boy
Previously thought to be in retirement.  Tucker has a juvenile record for assault on a canine and fraternizing with felines.

Shown above is Rudy.
Known aliases include:  Kazootie, Two Shoes, Bitey Whitie, Gater Boy
Don't be sucked in by his youth.  Rudy is the suspected leader of the Possom Dog Gang and he is famous for his death dance. 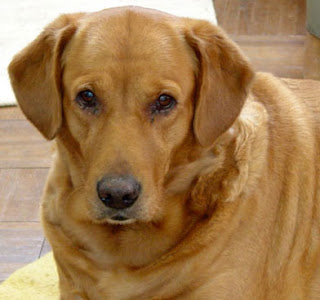 Also suspected to be a member of the Possom Dog Gang is
Lucy, shown above.  Aliases include:  Handmaiden, Goosy, Sweet Pea
Previous arrests for snake slinging and bird assault.  Often been seen in the company of Possom Dog Gang members.
If you should see any of these individuals call the authorities.  Do not try to apprehend them yourself.
Posted by Talking-Dogs at 8:21 AM