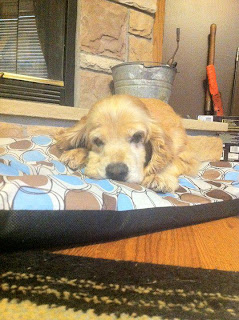 Joplin tornado victim, Sugar, a Cocker Spaniel, has been reunited with at least part of her family.  Twelve weeks after the May 22 tornado devastated Joplin, there is some good news for the family of Johnnie Richey.

Richey was killed with the twister flattened the Joplin Elks Lodge.  His home was also destroyed.  Richey's family spent days after the storm trying to find him, only to learn that he had perished in the storm.   In addition, Richey's constant companion, Sugar, a 9 year old blond Cocker Spaniel was also missing.
Richey's sister, Kerri Simms,  began a campaign of missing posters and created a Facebook page just for the purpose of finding Sugar.  As the weeks passed, the family worried about just how slim the chance was that Sugar would be found.
On August 12 a taxi cab driver in Joplin, Chris Ruport, noticed a stray dog who looked "pretty beat up" on the street and decided to pick it up.  His wife posted a photo of the dog on Craigslist.  Within hours the Richey family had been notified that a dog matching Sugar's description had been found.   Richey's sister traveled to Joplin, identified Sugar and took her to the Emergency Pet Center in Joplin.
Sugar was treated for severe eye and ear infections, flea infestation, and severe dehydration.  Richey’s mother, Joyce Richey, said Sugar was weak when the family picked her up.

“When we first saw her, she was shaking real bad like she didn’t have the energy to stand, but they put her on (intravenous fluids) and kept her overnight, and she was better,” she said.
Kerri Simms, Richey's sister, has taken Sugar home and said Sugar has spent a lot of time sleeping and eating.  Finding Sugar has given her a new connection with her brother, Simms said.“It means having part of my brother back,” she said. “We can’t bring him back, but we can at least have her. Now we don’t have to wonder. They wouldn’t let us see my brother after the tornado, so I don’t want to say it’s closure, but we know now that she’s OK.”
Posted by Talking-Dogs at 2:29 PM