Puppy Mills in Missouri: SB 113 Passed; Prop B is Repealed 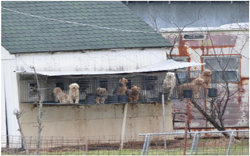 It's official.  The Missouri House of Representatives passed SB 113.  The repeal of Prop B, the Puppy Mill Cruelty Prevention Act, now goes to the desk of Missouri Governor Jay Nixon.
SB 113 dismantles Prop B piece by piece, not only lowering the boom on dogs suffering in substandard breeding facilities, but also delivering a knock out punch to democracy in Missouri.  If Governor Nixon signs this legislation, Prop B supporters have vowed to immediately begin gathering signatures for another referendum which would bring the issue back on a ballot for Missouri voters.

I have mixed emotions.  None of them are good.

Obviously, Missouri lawmakers are proud of Missouri's reputation as the Puppy Mill Capital and loathe to let that go.  It's also obvious - from their claims that Missouri voters didn't understand Prop B - that they think Missouri voters are dumb as dirt.

Last November the voters of Missouri said it was time to begin an end to puppy mills in our state.  They understood then that the dog breeding industry in our state has a myriad of problems and the state legislature has ignored the problems for years.

Unless Governor Nixon vetoes SB 113, dog breeders in Missouri can continue business as usual.  In Missouri it will be just fine that breeders stack dogs in wire cages, let them suffer extreme heat and cold, deprive them of clean water.  Breeders can have as many breeding dogs as they choose.

If you live in Missouri, please contact Governor Nixon at 673-751-3222 or via email  and urge him to veto SB 113.  Let him know that the democratic process and the well-being of commercial breeding dogs is important.
Posted by Talking-Dogs at 3:57 AM