Dog Book Review: Guardians of Being by Eckhart Tolle and Patrick McDonnell 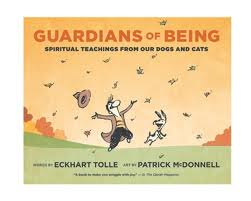 A guest blog post by the Dog Daddy at For Love of a Dog - Guardians of Being: Spiritual Teachings from Our Dogs and Cats - Book Review

A number of years ago I learned about Eckhart Tolle and began following his writings. The first book I read was “The Power of Now”. This book changed the way I see myself and the world.

I have since read numerous books by Tolle and am amazed by his insight.  So, I was thrilled when my dogs, with the help of my lovely wife, gave me “Guardians of Being” for my recent birthday.

The full name of the book is “Guardians of Being, Spiritual Teachings from Our Dogs and Cats” The words are by Eckhart Tolle, spiritual teacher, and the art is by Patrick McDonnell, creator of the comic strip MUTTS. These two are truly inspired and work wonderfully together.

In Tolle’s writings he often speaks about dogs and how they can teach us to be in the Now, so I was excited to read this book. I have already read it 3 times.  It will definitely be one of those books I keep close and re-visit.

Anyone who has ever loved a dog or a cat will love this book and as you read you will find yourself saying YES! I know that! I knew that! I feel that!

Tolle teaches that all animals - dogs and cats specifically - as we live and love so closely with them, are in the original state of consciousness and are not encumbered by the human mind and ego which keeps us locked in the past or present and not in the now, where dogs and cats reside. So by observing our animals and being in the here and now with them we can learn to better experience the joy of life.

“It’s so wonderful to watch an animal because an animal has no opinion about itself. IT IS.”   Tolle

“The vital function that pets fulfill in this world hasn’t been fully recognized. They keep millions of people sane.” Tolle


“I have lived with many Zen Masters, all of them cats.” Tolle


“Love is a deep empathy with the other’s Beingness. You recognize yourself, your essence, in the other. And so you can no longer inflict suffering on the other.” Tolle

The quotations above are just a sample of the great wisdom in this book and the great wisdom of our pets. The art by McDonnell which accompany Tolle's words, go along with these teachings to highlight the words and the wisdom. I would encourage all pet owners to read this book to remind you of the spiritual wisdom they possess and to assist them in doing their job of being Guardians of Being. 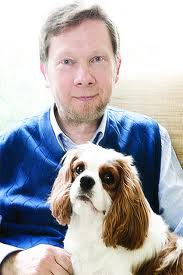 Spiritual teacher and author Eckhart Tolle was born in Germany and educated at the Universities of London and Cambridge. At the age of twenty-nine a profound inner transformation radically changed the course of his life. The next few years were devoted to understanding, integrating, and deepening that transformation, which marked the beginning of an intense inward journey. Later, he began to work in London with individuals and small groups as a counselor and spiritual teacher. Since 1995 he has lived in Vancouver, Canada.Eckhart Tolle is the author of the New York Times bestsellers The Power of Now (translated into 33 languages) and A New Earth, which are widely regarded as two of the most influential spiritual books of our time. In 2008, A New Earth became the first spiritual book to be selected for Oprah's Book Club as well as the subject of a ten-week online workshop co-taught by Eckhart and Oprah.  Learn more at his web site www.eckharttolle.com 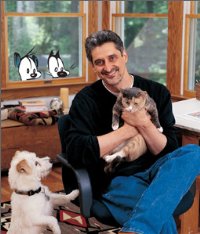 Patrick McDonnell is a New York Times best-selling author. He received the National Cartoonists Society Reuben Award for Cartoonist of the Year in 1999, and Mutts was named Strip of the Year in 1997. A dedicated animal advocate and Genesis Award recipient, McDonnell regularly lends his talents to animal protection groups and issues, including the Humane Society of the United States, where he serves on the national board of directors. McDonnell was also recently elected to the board of directors of the Charles M. Schulz Museum. He is a native of New Jersey.  Learn more at his web site www.MuttsComics.com
Posted by Talking-Dogs at 11:56 AM