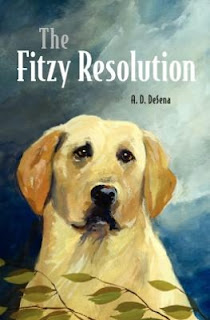 If you enjoy political thrillers and think it might be fun for dogs to be the central characters, here's a fun read!

The Fitzy Resolution by A.D. DeSena and published by Dogged Publishers, had me hooked on the very first page with the description of the story's heroine, Casey.

Casey is a three year old yellow Labrador Retriever who happens to be a Senator in the Central Canine Government and the head of the Committee of Inter-Canine Communication.

Yes, you read that correctly.  Set aside reality for a moment.  Open this book and you are plunged immediately into a world of dogs that is, quite possibly, like none you've imagined.

De Sena notes in the Prologue:

The world of dogs has been obscure despite the fact that they live in plain sight of their human counterparts.  The following story reflects my efforts in piecing together various canine historical documents over a period of many years...

What follows is a tale of mystery and political intrigue old from the animals' points of view.

As conflict builds between the Central Canine Government and the Wilds, Senator Labrador-Casey is called to investigate the mysterious disappearances of canines in her district.  Meanwhile, Juniper, a shrewd veteran Senator, seeks to exploit every political opportunity, including Casey's investigation, for his own personal gain.  As her investigation leads her snout to snout with disturbing facts about her government and her world, Casey must race against time to stop Juniper from achieving his ultimate political goals.  The result is a battle that pits two political philosophies against one another and threatens the very existence of canine society!

A serious read, don't think you'll breeze through The Fitzy Resolution.  With it's highly detailed plot narrative, you'll want to pay attention to the details. As you discover the story is a creative tale about animal welfare, you'll truly appreciate the conclusion.

Though I usually am not fond of stories written in the voice of dogs (or other animals), the heroine, Casey, was immensely appealing to me.  More importantly, DeSena's story is a very detailed and highly nuanced serious read.  Think: Tom Cruise movie (with Tom Cruise as a female yellow lab) or Margaret Atwood's The Handmaid's Tale (with dogs, rather than women, as the central theme.)

Spend some time with Casey as she discovers the humans to whom dogs have been so loyal are also a great danger to them.  Celebrate with this yellow lab when the Fitzy Resolution is passed and canine oppression is ended.