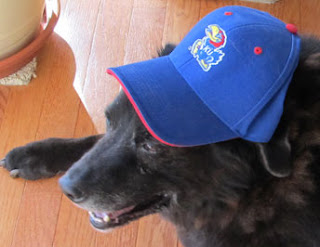 Tucker Canine Kottwitz, age 14, passed away at home on his farm in the rural Missouri Ozarks on October 7, 2011.  He was born in Virginia in 1997 to unknown parents.
Nothing is known of his first two months of life, but he chose his own home when he found his way to the Kottwitz farm in rural Pittsylvania County, Virginia.  Because he came from the road (Tucker Road) he took the name Tucker.  He later was known by the aliases: Butt Boy, Sugar Lips, the Tuckmeister and Sweet Pea.
Tucker was employed at For Love of a Dog as Head of Security and enjoyed running patrols, as well as acted as official greeter.   In later years he enjoyed napping while watching his yard.  Tucker was a member of the Black Dog Club of Missouri, Dogster, the Possom Gang and he was the chief correspondent for the Talking Dogs Blog.  He was a Kansas Jayhawks and Duke Blue Devils fan and never missed NCAA March Madness.
He leaves behind his adopted parents, Sue and Gary and siblings Lucy B, Jefferson, Rudy, Skeeter, Ditty and Cakes, all of the home.
Tucker was buried on the farm, near his beloved feline buddy, Petey.  A holly tree has been planted in his honor and to eventually shade their graves.

He was a jolly gentleman, a bonny companion, and will forever be missed by his family and all who were blessed to know him.

A memorial essay will be posted tomorrow.
Posted by Talking-Dogs at 4:30 PM