Ignorance can reap a bitter harvest.

That's the alternate title of this blog post about my Spanky and his death from canine oral cancer.


This is not the post I planned to write.  However, I decided to leave out the pathos because what is really important is to make checking inside your dog's mouth a normal weekly activity.

Know what normal looks like and head to the vet immediately if something just doesn't seem right.
At a routine health checkup when he was almost 9 years old, the vet recommended a dental cleaning for my black Lab mix, Spanky.  We were preparing to make a cross country move, so after some discussion about the anesthesia and procedure, I agreed.  We decided that it would be best if his regular vet took care of this instead of having to worry about it after the move when we were getting settled.

Spanky did fine with the cleaning.  When I came to pick him up, he was already out of anesthesia, walking around and charming everyone in the vet clinic.

A few months later we made our move and we soon realized that something was wrong.  Spanky's breath had become killer.  We needed a vet.  ASAP.

There were only two small animal veterinarians in our immediate area.  Note: when you live in a rural area, choices (in many things) are quite limited.  Anyway, one vet came highly recommended by many.

We told Dr. L about the bad breath and recent dental cleaning.  Spanky had no other symptoms.  So, imagine our shock when we got the diagnosis:  malignant melanoma.    Dr. L called our previous vet who told her that she'd also removed a small "skin tag" from one side of Spanky's upper gum almost on the roof of his mouth.  She not only did not do a biopsy, she did not inform us.

Now Spanky had cancerous growth on the roof of his mouth.  Spanky was scheduled for surgery the next day. Though the surgery appeared successful, the cancerous growth came back with a vengeance.  At the time, chemo and radiation therapies were not recommended.  The cancer was far too aggressive.

Within five months of diagnosis, Spanky's quality of life was such that we made the very hard decision to let him go.

Even if Spanky's original vet had biopsied the growth and he'd had surgery much sooner, he probably would have only lived a few more months at best.  Canine oral melanoma can be a very fast killer.

The most common oral melanomas are found on the lips, gums, palate and tongue.  They may be pigmented or unpigmented lesions.  As they grow they spread to the jaw, neck and head, plus can metastasize to any part of the dog's body.  The life expectancy of a dog with advanced canine oral melanoma can be as little as five months.

Spanky was black, male and nearly 10 years old.  The only symptom Spanky had was the first:  terribly bad breath.  Otherwise he seemed to be in perfect health and spirits.

Standard treatment is surgery to remove the cancerous legion(s) and surrounding tissue.  This sometimes means removal of part of the jaw or face.  Radiation may be prescribed, as well as chemotherapy.  Early research results of a new oral melanoma vaccine may extend life expectancy from five months to about a year. Recurrence of oral melanoma is very common.

I learned the hard way to regularly check my dogs' mouths for signs of anything at all unusual, to make sure my vet checks and keeps me informed.


Since Spanky's ordeal, there have been major developments in fighting cancer.  When caught in time, cancer does not mean a death sentence.

Talking Dogs is participating in the Give Cancer the Paw blog hop, hosted by Pooch Smooches and Peggy's Pet Place.  Join us with a  tribute to a lost pet, personal experiences, tips, research - anything related to pet cancer. 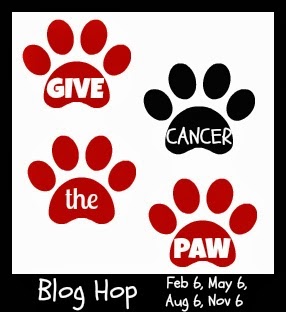 Talking Dogs is the official blog of For Love of a Dog Jewelry.
Posted by Talking-Dogs at 1:00 AM