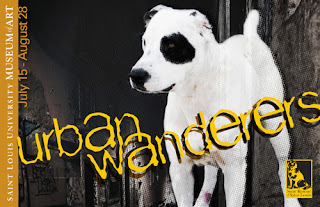 The Urban Wanderers art exhibit at the Saint Louis University Museum of Art puts a new spin on the image of Pit Bulls.  According to Randy Grim, the organizer of the event, this art show is about dispelling the myth of the Pit Bull.  "Everybody has these preconceived notions.  Actually at the turn of the century they were used for nanny dogs," he said.
The artwork in the exhibit depicts dogs that Grim and his team have saved, or attempted to, through Stray Rescue of St Louis organization.  Dogs are not only the subject of the paintings, photographs and sculptures, in some cases they are the artists.
Admission to the exhibit is free.  The Saint Louis University Museum of Art is located at 3633 Lindell Blvd in St Louis.

Bids are being taken online for the artwork until the end of August.  Head on over to Stray Rescue and bid.  Proceeds will go to Stray Rescue and help them continue to rescue abandoned and abused dogs.  You can also read more about Randy Grim and his efforts to rescue the homeless dogs of St Louis in our Talking Dogs blog post.