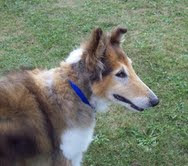 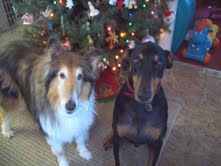 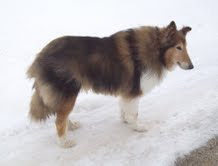 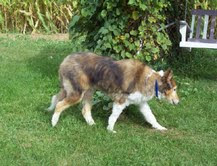 I don’t know about you, but I think there’s a special place in heaven for people who rescue animals.
Several months ago my friend, Julie, began thinking about adding another dog to her family. She began to haunt Petfinder and found herself drawn to old dogs. Her feeling was that the dogs in rescues were probably all going to be eventually okay, so her focus became adopting an old dog who was at a shelter. Believing she could give an old dog a new home and provide it a wonderful life for it’s last years, she surfed Petfinder for that certain chemistry that happens.
Not long after she began tempting herself with Petfinder searches, Julie was driving home from the barn where she boards her horse. On the highway she saw a man walking with two dogs. Being a dog lover, as she drove past the trio she took a good look at the dogs. Her heart stopped when she saw that the Collie was matted beyond belief, appeared old and not at all happy. Julie had to keep going, but felt terrible. She yearned to do something for the dog, but struggled with what that could be. She thought about calling on the owner and talking to him about the dog, but she didn’t.

Life went on, weeks passed by. Julie was driving home from the stables again when she spotted a dog trotting down a highway and panting. The dog was so matted that she couldn’t even tell if it was a male or female at first. She suspected he was an older dog since he had some gray and trotted with a bit of a gimp. After checking with a neighbor in the area who had no idea who owned the dog, Julie took him home. Finding it impossible to get a comb through his matted fur, off they went to the vet for shaving. While grooming they found that an old flea collar was imbedded in the matted fur and had to be cut out. Of course, the dog needed a rabies shot, plus the vet found he had a skin infection, ear infection. $150 later, Julie took him home.
There, he fitted in so nicely. He got along with Julie’s Doberman Pinscher, Jake. He was very affectionate towards people, especially little children that came to the house. Julie and her family began looking up names, especially Irish names to call the dog. However, they kept coming back to “Buddy“ because he just seemed like he was a Buddy.
Julie is a responsible animal advocate, so she did due diligence to try to find Buddy’s owner. She checked newspapers and bulletin boards in the area. Left the information at the vet’s office. Julie had had Buddy for about two weeks and he was enjoying himself, perking up, and fitting right into her family.
About this time a friend of Julie’s was in need of hay for her horse. Julie noticed in Craigslist that there was a guy near her that was selling hay. So, she gave the phone number to her friend. Her friend went to see the hay. It was there that Julie’s friend discovered Buddy’s owner. Buddy belonged to the hay seller’s brother. The Collie dog was 12 years old, relegated to living at the barn alone and suffered in the winter from skin problems. This past fall the dog began coming up to all humans at the barn and barking for no apparent reason.

Julie talked with the owner of the dog. After explaining how she came by him, plus the money they’d spent on vet care, and how very attached her family had become to him, the owner decided to let Julie keep him. The owner told Julie the dog’s name was… Buddy.
This fellow used to walk with his two dogs along the highway. And yes, they are the trio Julie was months earlier. And when Julie picked him up, Buddy was trotting away from his barn home, not going towards it.
Today Buddy is doing great and his coat is growing out, showing what a beautiful boy he really is. He may have grown up in a barn, but he’s now housebroken and doesn’t let Julie forget a single mealtime. He loves to sleep on his blankie next to his playmate, Jake the Doberman. Buddy is a much younger twelve years than he was before.
Sometimes I truly believe there are no coincidences in life. Sometimes seemingly stray and unrelated events all come together in ways we would not anticipate. Timing in life can be everything. Did Buddy catch the wave of Julie’s intention to rescue a needy older dog? Was he trotting towards her because he knew he should? Was Julie drawn to older dogs because somehow she was preparing for her rescue of Buddy? Meant to be? You decide.
Fetch more dog stories at For Love of a Dog.