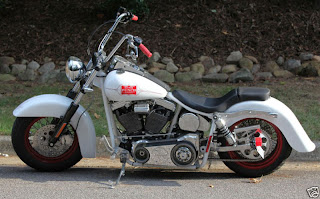 You don't even have to be good for Santa to bring you this Harley Davidson SuckerPunch Sally Swinger motocycle. All you have to do is bid! And the best part is that your money will be going to help Pit Bulls!
This sweet ride is up for auction and every penny that's raised from the sale is going to be poured right into the BADRAP Barn Project so they can help homeless pit bulls in 2010 and beyond. BADRAP is a non-profit organization that works to help homeless and victimized pit bulls and pit bull mixes. 100% of the proceeds from the sale of this bike will be going to help BADRAP build a halfway house for pit bulls. You probably have read about their work with the Vick dogs.
Bravo to the pit bull loving anonymous donor who decided to let go of his precious Sally so that some good dogs could get a second chance. The auction ends on Monday, December 14th. I just checked and right now the reserve had not been met. If the bike doesn't sell this time around, they'll try another auction, so spread the world.
The Sucker Punch Sally Swinger is a modern suspension bike done in the tradition of a mid 1950's Harley Davidson FL; low stance, big fat fenders, spoked wheels and custom pinstriping. The Swinger is powered by an 88 cubic inch RevTech V-Twin with a 2-into-1 exhaust for easy cruising, channeling power through a 3 inch belt driven primary and a Baker 6 speed transmission. The Swinger features Harley Davidson controls and a 4.2 gallon split tank for long highway rides. The bike currently has 905 plus miles on it. The only minor defect is a little discoloration of the exhaust pipe. Other than that, it is flawless. There are lots of photos and more information in the eBay auction description.
Help pit bulls and bid on this amazing bike now!
Woof! Tucker at For Love of a Dog
Posted by Talking-Dogs at 2:51 AM