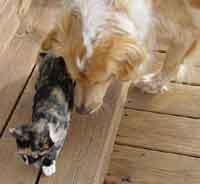 I promised a picture of Jeffie and Isabel together and here it is. I know it's not all that great, but neither one of them would hold still! Even though Isabel looks plenty small in the picture, she was even smaller when she arrived at our place. Mama says she's growing like a weed.
Can you believe people just dump kittens and puppies like this? Even though I was abandoned as a little puppy, I still find it hard to believe. Around here Isabel could've easily ended up as lunch for a coyote. She was sure lucky to find our farm!
Anyway... Jeffie adores Isabel, though she's so little he's not exactly sure what to do with her. They chase each other and take walks around the yard. She doesn't really patrol with him... can't keep up.
I've heard Mama tell Daddy that this all proves her point... that Jeffie needs a puppy of his own. She's been lobbying for awhile. Lucy and I are pretty old and we don't play a lot any more. Jeffie has so much energy that he sometimes overwhelms us. Plus Mama says there are so many pups that need homes ... but Daddy says his limit is 2 dogs. Yeah, you read that right. 2 dogs. And we already have 3. So I think Isabel will have to do for spicing up Jeffie's life.
Woof! Tucker
Posted by Talking-Dogs at 6:36 AM