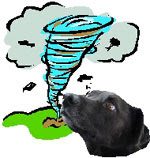 I'm sorry that I haven't written for awhile, but I have a good reason!
Now I know there's something I hate worse than lightning and thunder... tornadoes! They ripped through our neighborhood and just when we thought the coast was clear, here came another one on the same track! Here at our house we just had some minor damage, but several of our neighbors lost everything.
Mama and Daddy have been helping with the clean up and they come home talking about how lucky we were. In fact, at one place the humans weren't home, but their dog was. Poor guy was outside in his pen. The tornado took their house, barn, the dog pen, the dog house and the tree it was under... but the little dog was just fine! Boy! He was a lucky little soul!
Now its bitterly cold here, but I don't mind because there won't be another tornado!
Woof Woof!
Tucker
Posted by Talking-Dogs at 10:23 AM